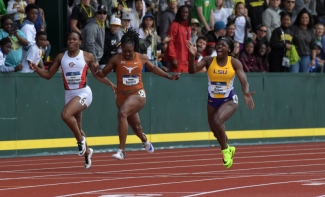 Henderson leads SDSU with three selections, including first-team honors in both the 100 and 4x100

Like last year, Ashley Henderson earned first-team honors in both the 4x100-meter relay and the 100-meter dash, and second-team accolades in the 200. Micha Auzenne, Simone Glenn and Rochene Smith joined Henderson on the first-team 4x100. Auzenne (100 hurdles) and Andrenette Knight (400 hurdles) each made the second team in their respective hurdle events, while Bonnie Draxler (pole vault) and Glenn (200) were honorable-mention selections.

The six athletes helped the Aztecs finish in a tie for 32nd at the NCAA Championships.

Draxler and Glenn garnered honorable-mention status as Draxler competed in the pole vault and Glenn was 21st in the 200 (23.69).

San Diego State could have athletes compete at the U.S. Outdoor Championships, which take place from June 22-25 at Sacramento State’s Hornet Stadium. Henderson has earned the “A” standard in the 100 and 200, while Glenn has posted an “A” time in the 200 and Auzenne has an “A” mark in the 100 hurdles. Accepted entries to the U.S. Outdoor Championships will be announced in the coming days.