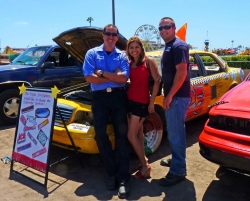 The Firefighters Demolition Derby has been a long-standing tradition in East County, dating back to the days of the old Cajon Speedway. The event disappeared when the Speedway shut down in 2005—until now, when Viejas resurrected the Derby and brought it to Del Mar. View our videos of the derby’s opening and final round segments. 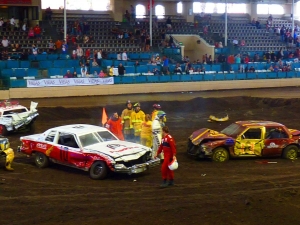 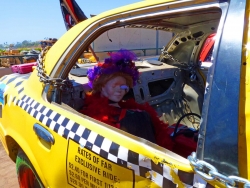 Drivers relished their roles; one dressed up like a caped crusader, while another carried a female crash dummy in the backseat.

All glass including windows and headlights were removed from the cars to keep the show ring safe for horses later when horseracing season begins.

As competitors made their way into the arena, one refurbished junker spewed steam from an apparently broken radiator , disqualified even before the first round began.

“Five, four, three, two, one!” the crowd roared in unison, counting down just like in the old days at Cajon Speedway. The checkered flag dropped and the first six contestants revved up their motors and took aim at one another.

Under the rules, the top two left running after each round qualified for a final round. Any vehicle stuck on the dirt berm was disqualified and carted off by a large earth mover with a shovel on the front. Thankfully no fires needed to be doused – though fire engines were in plentiful supply at the Derby, the finale of an all-day Fire-Safe Expo co-sponsored by Viejas and the San Diego Burn In 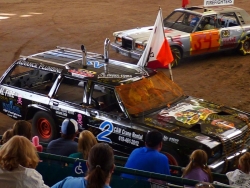 Among the teams emerging more-or-less unscathed after the first one were Viejas, which had refurbished a taxicab with over 400,000 miles, and Cal-Fire, which sported a spruced up station wagon.

After all initial rounds were completed, teams got a five minute break to replace flat tires, refuel gas tanks (moved into the back seats for safety’s sake), and conduct other repairs. One team brought out a sledgehammer to flatten out a buckled hood; another driver climbed onto the hood of his car and jumped up and down.

A boisterous crowd cheered on their favorite teams as the final round got underway, with mud flying, steam and smoke spewing upwards as cars smashed into one another and auto parts littered the arena. (Kids, please don’t try this at home!) Jerry LaVigne won the  first Stephen Brucker Memorial Destruction Derby (named after the late owner of the old El Cajon Speedway), driving a 1978 Buick Limited. Bob Pfohl placed second for Viejas Fire, driving his refuurbished Crown Victoria taxicab.

With the top two places won by Lemon Grove and Viejas, 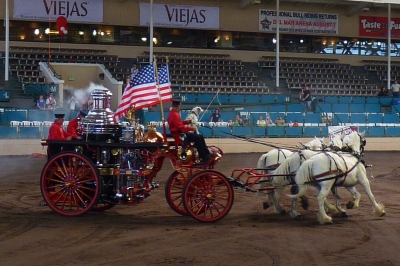 East County’s firefighters secured their reputation as tops in the demolition derby.

The Fire-Safe Expo also included a parade of firefighting vehicles from around the County, led by a horse-drawn antique firefighting pump wagon complete with dalmation firedog.  After the parade, visitors enjoyed close-up views of the equipment. 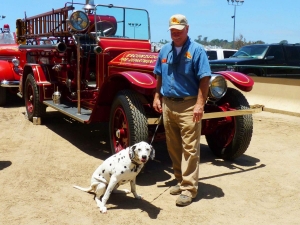 The day-long event also included rides for younsters on a miniature fire truck, hose-lay runs for kids dressed up in firefighting gear,  and San Miguel Fire's trailer where kids could pratice "stop, drop and roll" and escape techniques. 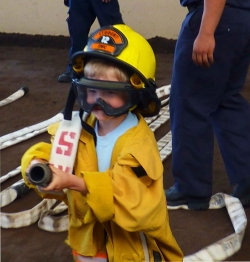 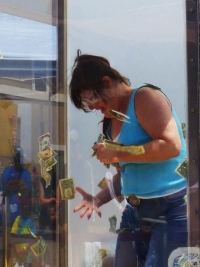 Viejas also brought along its famed "Green Machine," where winners in a drawing got to enter a glass-walled booth and grab for flying cash scattered by a blower. 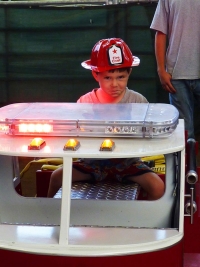 Firefighters were on hand to pass boots for visitors to fill with cash -- all to help burn patients at the San Diego Burn Institute. 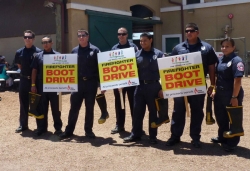 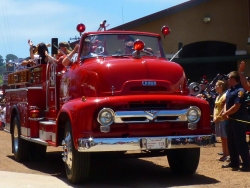 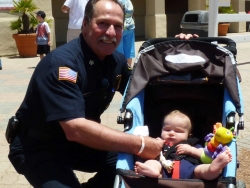 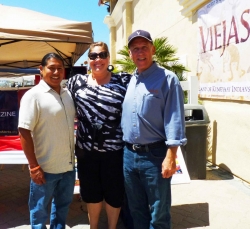 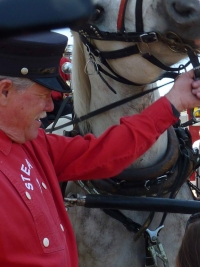 are these racers used aftermarket car parts for their car?or there is a section for it?i want to join some race too.