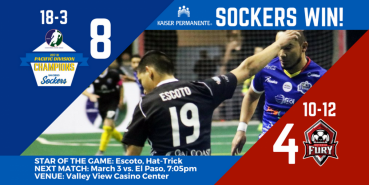 March 1, 2018 (Ontario) - The Pacific Division Champion San Diego Sockers ended the postseason dreams of the Ontario Fury with an 8-4 win before a gathering of 3,279 at Citizens Business Bank Arena. The Sockers (18-3), who will meet the Tacoma Stars in the Divisional Championship Series beginning Wednesday, March 7,  are one win away from securing the second-best record in the MASL and the possibility of having home-field advantage throughout the playoffs.

After a tight and scoreless first quarter, San Diego's leading scorer Kraig Chiles deposited the ball in the back of the Fury net at 2:18 of the second period. For Chiles, it was his 50th point on the season. However, Ontario would come back to take a 2-1 lead on goals from Francisco Cordeiro and Leonardo De Oliveira. The turning point in the game was a late tying goal by Matt Clare with only 5.6 seconds remaining before the break.

San Diego used that momentum to strike early in the third when Chiles tallied his second goal of the night only 19 seconds into the period. The goal began a three-goal spree that gave the Sockers some breathing room. Brandon Escoto and John Sosa finished the stanza with a goal each. The Fury would add another goal with four minutes left in the period to get within two, but they would get no closer.
The fourth period would feature two goals from Escoto and Clare's second of the match to close out the game.
Goalkeeper Boris Pardo improved his record to 9-0-1 by making 14 saves on 18 Fury shots. The MASL's leading goalkeeper made key saves throughout the game to preserve the victory for San Diego.
The Stars were the beneficiaries of San Diego's win as they clinched the final playoff berth. The two teams will now meet in the best-of-three Divisional Championship Series beginning on Wednesday, March 7, in Tacoma. Game Two and a possible Mini-Game will be played at Valley View Casino Center on Saturday, March 10., 7:05 p.m. Tickets are on sale for the postseason at Sockers.com/Playoff.
San Diego closes out the 2017-18 MASL regular season on Saturday, March 3 at 7:05 p.m. at Valley View Casino Center.