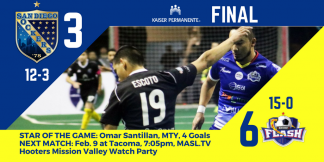 January 28, 2018 (Monterrey, Mexico) - Omar Santillan's four-goal performance power the Monterrey Flash to a 6-3 win over the visiting San Diego Sockers in Arena Monterrey on Sunday afternoon. The Flash improved to 15-0, while the Sockers dropped to 12-3 on the season. The win gives Monterrey the advantage in the playoffs, if the two teams meet again the game will be played in Mexico. San Diego's magic number to clinch a playoff berth remains at three.

San Diego held a 2-1 halftime lead on goals by Erick Tovar and Kraig Chiles. Chiles extended his goal-scoring streak to 12 games. Santillan opened the scoring at 8:12 of the first period from a Carlos Farias pass.

Santillan scored all three Flash goals in the third quarter, allowing them to get momentum and take control of the game. Edgar Gonzalez tallied only 40 seconds into the fourth to extend the Flash lead to 5-2.

San Diego went to the sixth-attacker with just over seven minutes remaining and it paid off, as Matt Clare scored past Monterrey goalkeeper Diego Reynoso. The talented Reynoso had a terrific game making 11 saves on 24 San Diego shots. Sockers goalkeeper Chris Toth (6-2) suffered the loss, however many of the Flash goals were unstoppable. Monterrey added a late sixth-attacker goal to finish the scoring.

San Diego will enjoy a bye week before heading to the Pacific Northwest to play the Tacoma Stars on Friday, February 9 at 7:05 p.m.