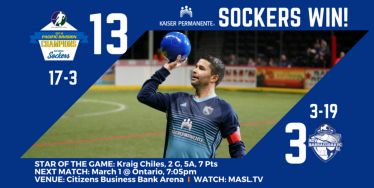 San Diego closes out the regular season with two games with playoff implications; next Saturday is the season finale against El Paso at Valley View Casino Center

San Diego, who is seeking the second-best record in the MASL, will travel to Ontario on Thursday before hosting El Paso on Saturday in the season finale. Ontario (10-11), who is battling Tacoma (10-11) for the final Pacific Division postseason berth, needs to defeat San Diego and hope that Tacoma loses next Sunday against Kansas City. The Sockers want the best record possible to be able to host the Conference Championship and/or the MASL Championship Game.

The Barracudas surprised San Diego by striking first and early on a Reynol Fuentes, Jr. goal at 2:41 of the first period. The lead was short-lived as Medina tallied his first of three goals only 19 seconds later to tie the game. San Diego would then run off six more goals before RGV would score again. Clare had a hat-trick within 13 minutes, while Medina, Brain Farber (twice), Brandon Escoto, and Max Touloute also found the back of the net to give San Diego a 9-2 halftime advantage.
The Sockers cruised in the second half scoring only four goals (Chiles(2), Medina and Ruiz) for the 13-3 final score.