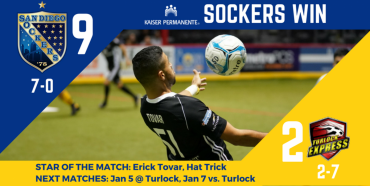 December 17, 2017 (San Diego) - The 14-time champion San Diego Sockers moved to 7-0 with a 9-2 victory over the Turlock Express before 3,240 at Valley View Casino Center. With the win, the Sockers take full control of the Pacific Division earning a 3 ½ game lead over second place Ontario. Erick Tovar led the attack with his first hat-trick of the season.

Tovar scored his three goals in the second half, but by that time the Sockers had a 4-1 lead and were in control of the match. After a scoreless first quarter, San Diego scored three consecutive second-quarter goals by Raymundo Contreras, Anthony Medina, and Kraig Chiles for a 3-0 halftime margin.

Matt Clare opened the third quarter scoring at the 3:52 mark from an assist Luis Ortega. Tovar gathered a pass from Chiles for his first goal a minute later. His second and third goals bookended the goals in the fourth period.  In between, Medina notched his second goal in his first action of the season and Felipe Gonzalez found the back of the net against the sixth-attacker at 14:37 to close the scoring.

Turlock’s two goals were scored by the MASL’s second-leading scorer Ivan Campos. He now has 24 points on 18 goals and six assists.

Sockers goalkeeper Boris Pardo made 14 saves to go to 4-0 on the season. With his performance, he leapfrogs teammate Chris Toth as the top keeper in the MASL with 3.25 GAA and a .797 save percentage. However, Toth is not ranked because of a quirky league rule that requires a goalkeeper to play 50% of his team’s games to be eligible. Toth, who has played in three games, would be second in GAA (3.33) and first in save percentage (.804).

Chiles continues to lead the team in scoring with 14 goals and six assists for 20 points. Clare is the assist leader with eight.

The Sockers will play the Express in Turlock on Friday, January 5, 7:05 p.m. San Diego will then host Turlock on January 7, 5:05 p.m. at Valley View Casino Center.