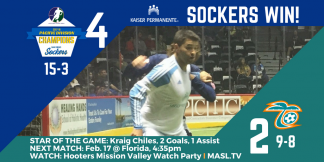 February 16, 2018 (Lakeland, Fla.) - The Pacific Division Champion San Diego Sockers were held to only four goals, but that was enough to defeat Florida 4-2 at RP Funding Center on Friday night. San Diego improves to 15-3, while the Tropics' playoff hopes were dashed with the loss to drop to 9-8.

This year, the Sockers have been an explosive offensive team averaging over seven goals per game. However, tonight San Diego managed only 18 shots against a determined Tropics defense. San Diego bookended two Florida second-period goals with their four tallies. Captian Kraig Chiles scored the two most important goals of the game, the opener (4:04, 1st) and the game-winner (1:16, 3rd) to lead the Sockers to the tough win. Luan Oliveira added one marker and one assist to help the cause. With the game no longer in doubt, Hiram Ruiz put the ball into an empty net with four seconds left to end the scoring.

Ricardo De Queiroz Diegues and Marco Rodriquez scored for Florida, who had a game-high 19 shots. Sockers goalkeeper Boris Pardo made 13 saves to win his eighth match of the year. He lowered his league-leading goals-against average to 3.66 and raised his save percentage to .732 for third best in the MASL. Pardo's partner Chris Toth is expected to get the start in tomorrow's match. The duo is ranked #1 and #2 in GAA, and #2 (Toth) and #3 in save percentage.

San Diego will conclude the two-game road series against Florida on Saturday night at 4:35 p.m. The game is available on MASL.TV.