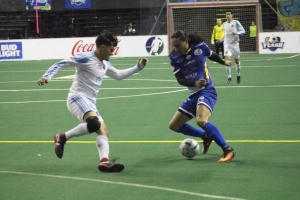 March 18, 2018 (Monterrey, Mexico) - The 14-time and 2017-18 Pacific Division Champion San Diego Sockers quest for their 15th title ended with a 6-4 loss to the Monterrey Flash in the MASL Ron Newman Cup Western Conference Final at Arena Monterrey on Sunday night. The theme of the night would be the near-misses by the Sockers throughout the game. San Diego, who has not yet made the championship round, has now lost three consecutive MASL semi-finals.

Damien Garcia opened the scoring at 6:54 of the first quarter with a blistering direct free-kick that pierced the upper part of the net past San Diego goalkeeper Boris Pardo. San Diego had several quality chances throughout the first stanza but hit the post or crossbar in their attempts. The Sockers tied the game with 24 seconds left after peppering the Monterrey goal for over four minutes. Kraig Chiles took a pass from Brandon Escoto and slotted a shot past Flash goalkeeper Diego Reynoso.

Monterrey built a 3-1 lead midway through the second period on goals by Edgar Gonzalez and Carlos Farias. The Sockers again had splendid scoring chances but misfired just wide on most of them. If the goal were one-foot wider, San Diego would have scored eight additional goals. However, they are not and the Sockers would regret those slightly off the mark shots. San Diego used their late period magic again when Hiram Ruiz found a rebound at the side of the goal and put it home with 11 seconds remaining before the half.

The Sockers equalized at 2:42 of the third period on a strike from Luan Oliveira, but Monterrey tallied only 36 seconds later to stop San Diego's momentum. Gonzalez scored his second marker of the evening to give the Flash a 4-3 lead. Ten minutes later, Omar Santillan blasted a shot into the net for a 5-3 Monterrey advantage going into the final quarter.

San Diego regained life early in the fourth period on a goal by Erick Tovar off a board-pass from Escoto at 1:14. The Sockers pressed for the rest of the period and when John Sosa came in as the sixth-attacker with under four minutes left the team looked like it might have a chance to send the match into overtime. However, with two minutes remaining and Monterrey using pressure on San Diego, Raymundo Contreras looking for Sosa on the other side of the field was forced into a bad pass across the front of the goal allowing Brayan Aguilar an easy tap into the empty goal to secure the Western Conference title for the Flash.

Monterrey will host the Baltimore Blast in the Ron Newman Cup Championship Final on Sunday, March 25 at Arena Monterrey.