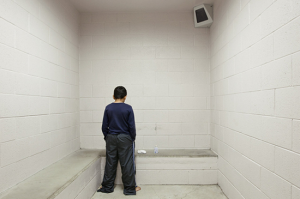 September 1, 2015 (Oakland)--Thousands of inmates are set to be released from solitary confinement in California prisons, following settlement of a legal case reached between the state and prisoners held in isolation for a decade or more at Pelican Bay State Prison. Prisoners there spend up to 23 hours a day confined in windowless cells with no access to mail, the law library or other services. A United Nations official has called the confinement cruel and unusual punishment akin to torture.

The State is considering applying the settlement terms to other prisons not included in the case in a U.S. District Court in Oakland.

Until recently, California had the highest rate of prisoners in solitary confinement in the nation; Texas now tops the list.

Under the settlement, the state will put inmates considered dangerous into small, high-security units where the prisoners will be able to access education and rehabilitation programs, as well as receive calls and visitors.

Those challenging California’s reliance on solitary confinement contended that the high number of prisoners in isolation failed to improve prison security. In response to complaints, the state has already moved about 1,100 prisoners out of solitary and into the general prison population over the last two years, without significant problems, the Los Angeles Times reports.

Many of those in solitary confinement are there due to suspected prison gang associations.  Now, those who have not violated a major prison rule in the last two years will be moved back into the general prison population.

Jules Lobel, an attorney with the Center for Constitutional Rights who represented prisoners in the case, has hailed the settlement as a “dramatic step forward.”

But the state prison guard’s union has voiced fears that the releases could jeopardize the safety of prisoner guards as well as other inmates.

The settlement is expected to impact about 1,800 of the 6,400 inmates currently remaining in solitary confinement.

In a 2013 report, a United Nations official responsible for tracking human rights abuses described it as “cruel punishment, even torture.”