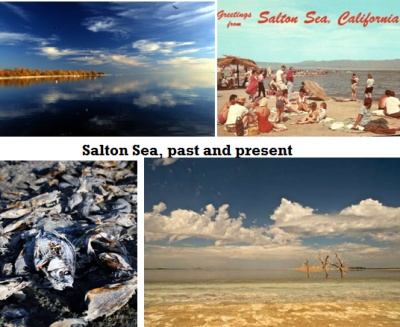 September 20, 2014 (Salton Sea) – The rotten smell in the desert just east of East County is the harbinger of worse things yet to come.

The odor comes from the 376-square-mile body of water known as the Salton Sea.  Concentrations of hydrogen sulfide were three times the State standard for health and safety.  Shifting winds have pushed the rotten-egg odor beyond the community of Mecca to the Coachella Valley.

Although the Salton Sea has a reputation for stinky in recent years – this is more than just dead fish.  Officials warned that the prolonged drought has radically changed the chemistry of the Sea.

A recent report by the Pacific Institute argued that the Salton Sea is entering “a period of very rapid deterioration,” with salinity levels expected to triple in coming years unless something is done to replenish water sources.

Researchers at the institute also warned that additional seabed will also be exposed to the air, leading to 100 tons of dust full of sediment and small-grain particles blowing into the air.

They warned that failure to act could cause “catastrophic change.”

Yet once, the Salton Sea was a resort destination popular with vacationers, boaters and fishermen.  It’s also home to migratory birds; more than a third of the nation’s migratory species stop over here. The lake has both a state recreation area and a national wildlife refuge along its shores, as well as a U.S. Geological Survey science office.

Once fed by Colorado River floodwaters and run off from agricultural lands, the already shrinking lake will be severely impacted starting in 2017 due to a legal settlement that will have a third of that flow bypass the Salton Sea region to instead, send water to urban San Diego.

The Salton Sea Authority is a state entity set up with a goal to someday restore and revitalize the Salton Sea, California’s largest lake.  Though that's a daunting challenge.

Assembly Bill 1096, just signed into law September 16, 2014 by Governor Jerry Brown, requires the Dept. of Fish and Wildlife to apply to the Department of Motor Vehicles for special licenses that may be issued, with funds to benefit restoration of the Salton Sea.

A similar program has generated over $12 million for the preservation of Lake Tahoe.  Backers hope the funds raised from license plate sales can serve as matching funds to win for grants for habitat restoration at the Salton Sea.

A public-private partnership could ultimately mean salvation for the Salton Sea, which also holds potential as a source for alternative energy in the future including geothermal, solar, and biodiesel algae pilot projects.

A Los Angeles Times editorial by University of Redlands enviornmental studies professor Tim Krantz, titled "A Persuasive Case for Saving the Salton Sea," concludes that funds from energy production could ultimately be used to install piping and a navigable lock-lift system to connect the Salton Sea, which has no natural drainage, to other waterways.  This in turn could someday bring eco-tourism and economic revitalization to the region.