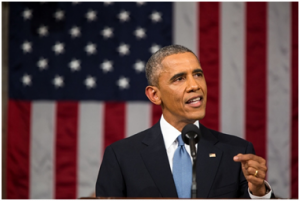 Note: Full text of the President's speech is posted below this story.

President Barack Obama delivered his State of the Union Address this Tuesday. With the eyes of the nation on Washington, he focused on middle class economics. His main goals are child care, labor, education, and healthcare. President Obama called on Congress and the American people to advance these goals.

He also cited his administration’s accomplishments, including ending the wars in Iraq and Afghanistan as well as implementing policies that he says resulted in “the fastest economic growth in over a decade, our deficits cut by two-thirds, a stock market that has doubled, and health care inflation at its lowest rate in 50 years.”

Still, he acknowledged that middle class families are struggling, and proposed solutions.