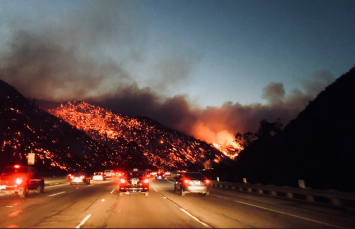 Photo by Thirdiphoto: Skirball Fire created hellacious conditions that shut down the 405 freeway today near the Getty Museum in Los Angeles.

December 6, 2017 (San Diego’s East County) – High winds fueling devastating fires in Los Angeles are set to hit San Diego County tomorrow, with gusts of 70 mph or more in some areas. Currently no fires are burning in San Diego County, though smoke from a fire in Mexico is visible near the border.  But the situation could turn perilous quickly if new fires start.  National Weather Forecaster Alex Tardy says Santa Ana winds could blow a fire in the inland area all the way to the coast.