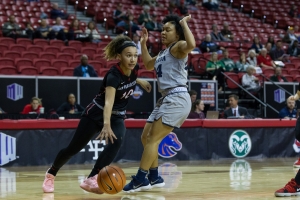 Murray had a team-high 20 points

Najé Murray had a team-high 20 points on 8-for-15 shooting. Mallory Adams struggled from the field but still managed 16 points after going 8-for-9 from the line and set a new career-high with 15 rebounds. Téa Adams chipped in 12 points and dished out a season-high six assists and Sophia Ramos added 10 points, seven rebounds and six assists.

The Spartans, who lead the Mountain West in three-pointers made and attempted, made three of them in the opening minutes to jump out to a 9-2 lead. The Aztecs missed their first shot but then made their next four to keep pace with the Spartans and trailed 14-12 midway through the quarter.

The Spartans hit eight of their first 11 shots and six of their first eight three-pointers. At one point, they made five straight shots and went on a 10-2 run and pushed their lead to ten points.

The Aztecs made the last five points of the first quarter and got the first bucket of the second as part of a 7-0 and closed the gap to three points. That would be the closest the Aztecs would get in the first half and the Spartans held a 41-32 lead at the halftime break. Sophia Ramos hit a three-quarter court shot at the buzzer that was originally ruled good but was overturned after video review.

Sophia Ramos hit a three in the Aztecs’ first second half possession but that was followed by a 7-0 run by the Spartans to give them a 13-point lead, their largest of the game at that point. However, SDSU responded with a 6-0 run to cut the deficit to seven points, but that would be the closest the Aztecs would get in the third.

The Spartans led by as much as 14 points (73-59) in the fourth quarter but the Aztecs roared back and cut the SJSU lead to 80-76 with 46 seconds left in the game. The Spartans then were able to hit four free throws down the stretch to hold on for the wire-to-wire win.

The Aztecs set a new season-high with 49 rebounds and held a +14 advantage over the Spartans. SDSU had 18 assists and just 13 turnovers but the 14 made threes by the Spartans were the most the Aztecs have allowed this season.

Analyss Benally’s seven three-pointers and 31 points are the most an opposing player has scored against the Aztecs this season.

Najé Murray now has 67 three-pointers on the year, the fourth most threes in a season in school history. She passed Carmelia Bloodsaw (65, 1991) and former teammate Lexy Thorderson (66, 2017) today. The school record is 77 held by Jamey Cox and Courtney Clements.

Mallory Adams had 16 points and a career-high 15 rebounds, her ninth double-double of the year and 13th time having 10 or more rebounds. Adams became the first Aztec with 15 or more rebounds in over a year (McKynzie Fort, 16 vs. SJSU, 2-24-18).

The Aztecs will head straight to Fresno where they will take on the Bulldogs Monday evening.