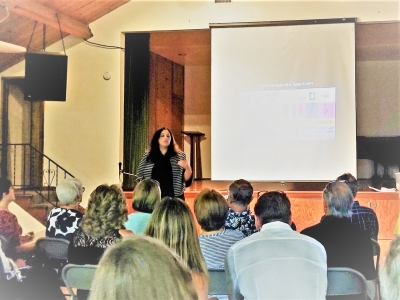 September 1, 2019 (Pine Valley) – How safe are wireless technologies including new 5G now being rolled out across our region?  Are the following useful to protect yourself against radioactive injuries: Y-Shield paint, a visit from a building biologist, EMF shielding curtains and fabrics, using airplane mode on your cell, turning off your router at night, and carrying around a portable, personal radiation detector?

At a presentation titled “Wireless Radiation – Keeping Safer in a Wireless World,” conducted in Pine Valley on August 28, conducted by New York attorney Dafna Tachover, those  means were introduced on how to partially protect yourself and your family against electromagnetic waves and radiation as San Diego County readies to roll out 5G small-cell wireless across our backcountry. She cited more ways as well.

Tachover states she was a telecommunication and computers officer with the Israeli Defense Forces. She was instrumental in having stricter limitations of WIFI use implemented in Israeli schools. Residents in the area had invited her to speak.

“People need to wake up to what is going on,” said Japatul Valley Road resident Patricia Hansen. Hansen was just one of the 37 in attendance at the Pine Valley Clubhouse. 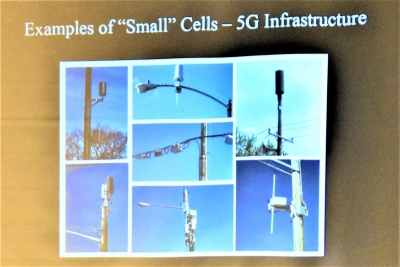 In June, CNET published an article that goes into depth on the health controversy.  Meanwhile several European countries are taking steps to slow down the process.  In April, the Belgian government halted a 5G test in Brussels over concerns that radiation from base stations might be harmful. Members of Parliament in the Netherlands are also calling on the government to take a closer look at 5G. Switzerland is taking steps to monitor 5G's impact on human health.

The wireless communications industry has insisted that these technologies are safe.  However, the FCC has not updated its standards in 25 years.

Public health officials and elected representatives differ on whether 5G and other wireless communications infrastructure poses serious health risks or not.  The World Health Organization's International Agency for Research on Cancer classified RF radiation as "possibly carcinogenic to humans" in 2011 after studies suggested links to a specific type of brain tumor. But the evidence was limited and some have called for further research. Further complicating matters, the New York Times has warned of Russian propaganda aimed at spreading alarm over 5G.

Attendees Dr. Kimberly Gambino (a chiropractor) and Mair Rathburn, both backcountry residents, cited how electromagnetic waves from laptops, cell phones, and other electromagnetic producers caused health issues with both

Gambino, who formerly lived in San Diego but now lives in Descanso, noted she had sensitivity to electromagnetic fields but said her health has improved greatly since moving away from areas with larger exposure to those fields and that she doesn’t need to visit doctors as often as in the past.

“I came up here to get away from the WIFI, “said Rathburn at the Pine Valley event. “I got eczema (among other conditions).”

Rathburn displayed an email with specifics relating to the County of San Diego and small cell wireless facilities (5G) on the check-in table that showed two links for county residents to reference:

Tachover introduced ways 5G, and the placement of more and more radioactive cell towers, big and small, will allegedly play in the development of cancers and symptoms relating to sensitivity to electromagnetic waves and hence electromagnetic injuries by highlighting studies. She posted an image that indicated where the future small cell towers will be—on streetlight poles plus. Additionally, she displayed alleged DNA damage images.

Tachover’s website references higher incidences of autism, ADHD and other conditions relating to exposure of electromagnetic exposure.  One posted website is: http://www.clearlightventures.com/blog/2015/9/11/the-emerging-lin-between-wireless-and-autism .

In her presentation Tachover also referenced a study by Dr. Nora Volkow:   http://www.minnpost.com/second-opinion/2011/2/nih-study-raises-new-health-concerns-about-cell-phones/

Tachnover also discussed how cell phone towers can influence minors and adults.  A cell phone tower near a school in Ripon, California has been removed according to a CBS Sacramento – Channel 13: report: https://sacramento.cbs.local.com/2019/3/25/ripon-cell-tower-school-removal-cancer/ .

Part of the “how’s” to protect yourself that Tachover mentioned illuminated the use of using:

Also noted were the storage of cellphones:  bras, men’s front pockets, and in turbans- that cellphone owners should consider before storing phones close to their bodies.

Tachover has founded the organization “We Are the Evidence”, a wireless technology injured advocacy group. For more information on her organization, you can visit https://wearetheevidence.org/ .