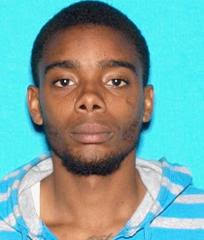 December 8, 2014 (San Diego's East County) - The Sheriff's Homicide Unit wants your help in finding the persons responsible for the murder of a man in the East County.

On July 1, 2014, deputies responded to a shooting at an apartment complex in the 9100 block of Kenwood Drive in an unincorporated area of Spring Valley. When they arrived, they found the body of a man later identified as 24-year-old Darius Reeves.

A witness told detectives he saw two Black men fleeing the scene right after the gunshots were heard. The suspects were seen driving away in an older model white or light colored sedan, possibly a late 1990s Nissan Altima. A surveillance photo is included in this bulletin. The suspects were last seen heading eastbound on Kenwood Drive.

Suspect #1 was described as a Black man standing about 5’8” tall and weighing around 135 pounds. He had a dark complexion with a short length dread-locks hairstyle. He was wearing a black hooded sweatshirt, dark pants, white shoes and dark gloves. He was seen carrying a handgun in his right hand. The gun was described as a semi-automatic. The top of the gun was a silver color and the bottom was black.

Suspect #2 was described as a Black man in his 20s, standing about 6’ tall and weighing around 160 pounds. He had a dark complexion, short hair and was wearing a black hooded sweatshirt with gray pants and white shoes.