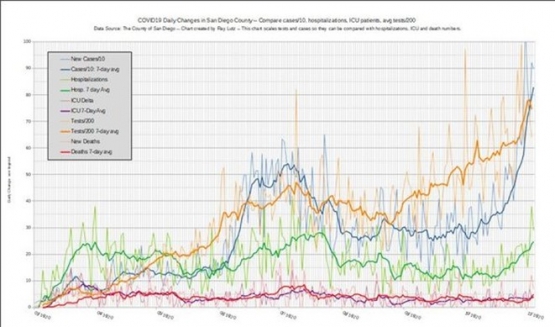 What the curfew impacts

The limited stay home order applies in Purple Tier counties including San Diego. Between 10 p.m. and 5 a.m., the order prohibits gatherings with people not in your household either on your property or elsewhere.

Non-essential businesses must cease operations during the curfew; only activities defined as “critical infrastructure” (COVID19.ca.gov Essential Workforce) may continue.

The curfew does not prohibit individuals or people in the same household from leaving their residence, as long as they don’t interact with people from other households. You can walk your dog, exercise alone or with those in your household, ride your horse, and travel for essential purposes such as medical visits, picking up food or going to the pharmacy. The curfew also does not apply to people who are homeless.

COVID-19 cases rose 50% in California during the first week in November, causing the state on Monday to put counties with 94% of the state’s population into the most restrictive purple tier, which shuts down indoor operations for restaurants, wineries and bars (which must serve food with alcohol), gyms, theaters, family entertainment centers, cardrooms, museums, zoos, and places of worship. Schools not yet reopened cannot do so at this time. Retailers and shopping centers must cut capacity to 25%.

Last week the state also issued a travel advisory, along with Oregon and Washington, urging residents to avoid travel if possible and to self-quarantine for 14 days after returning, if you do leave the state.

Dr. Erica Pan, California’s acting Public Health Officer, states, “Letting our guard down could put thousands of lives in danger and cripple our health care system. It is especially important that we band together to protect the most vulnerable around us as well as essential workers who are continuing their critical work amidst the next wave of widespread community transmission across the state.”

“The virus is spreading at a pace we haven’t seen since the start of this pandemic,” said Governor Gavin Newsom. “We are sounding the alarm.  IT is crucial that we act to decrease transmission and slow hospitalizations before the death count surges. We’ve done it before and we must do it again.”

Earlier this week San Diego recorded its highest ever number of cases, 1087, triple the number just three weeks ago.  Today, another 899 cases were reported, pushing the seven-day average to 829, a new pandemic record.  The hospitalization rate has also spiked locally to 83% of the highest level since the pandemic began.  Nearly five deaths a day are occurring locally.  The case rate is 10.7 cases per 100,000 residents, well above the Purple Tier threshold. There have also been 36 community outbreaks in the past week, far above the county’s own trigger of seven.  The most recent five outbreaks reported yesterday include two restaurant/bar settings, two businesses and one retailer. The positive rate of tests was 7% on Nov. 18.

Seven new deaths were reported yesterday in San Diego, with the youngest victim in their early 30s.

County enforces violations of health orders – including in local cities

With case rates also soaring locally, San Diego County officials have issued 52 cease and desist orders this week for businesses and churches that were defying the ban indoor operations and/or rules requiring masks and social distancing.

Many East County businesses received cease and desist orders in recent days, including in the city of El Cajon, despite Mayor Bill Wells publicly stating that El Cajon Police are not prioritizing enforcement of shutdown orders or other health regulations.

“We are ramping up and enhancing compliance as well as testing given the surge in cases,” Dr. Wilma Wooten, County Public Health Officer, said at a press conference today.  “We have not seen number like these in the course of the pandemic.”

The County asks the public to report flagrant violations of public health orders to (858) 694-2900 or safereopeningcomplianceteam@sdcounty.ca.gov

The County Sheriff today announced that it is sending enforcement teams across the region, which will first encourage compliance, but issue citations if necessary. Those could include criminal citations or in extreme circumstances, shutdowns, as were imposed on several defiant businesses earlier this year.

“The bottom line is, wear those damn masks out there and social distance,” Sheriff Bill Gore stated bluntly at a press conference today. Four two-deputy teams are now deployed full-time to followup on complaints received on the county’s tip line or online.

Mayor Wells denounced the county’s actions in an interview on KUSI today.  “I think that’s completely unwarranted,” he stated. “It’s Big Brother, the Evil Empire…I don’t know of a time when the Sheriff has superceded a city’s way of doing things. I don’t think that’s ever happened.”

On social media, area residents vented frustrations on both sides of the issue.

La Mesa Councilmember Kristine Alessio voiced disgust over the enforcement crackdown on businesses such as Major’s Diner, whose owner has said he can’t stay in business with outside-only service in temperatures dipping into the 30s.  “Anyone who participates in this enforcement is worthy of contempt,” she posted in Facebook, noting that Pine Valley has only had 12 COVID-19 cases since March. “It’s cold. They can’t do outside dining. Everyone has gone insane. If I were a deputy they’d have to fire me before I enforce this crap.”

But others voiced support for ramped up efforts to control the virus, including the state’s curfew and/or the enforcement crackdown, and expressed frustration at those flouting the rules.

Dave Myers, who ran for Sheriff against Bill Gore, voiced support for enforcement efforts and criticized Mayor Wells.  He wrote, "Hey Bill Wells, your hypocrisy is on full display. You fully support and instructed ECPD to arrest community members in a city park for feeding housing insecure folks but you won’t do the same to community members who endanger others during Covid!"

Anne Craig Tilmond posted regarding the curfew, “The question is, how many people will actually adhere to this? I'm so sick & tired of selfish, self-entitled people who refuse to do what's right for their fellow human beings. Stay safer at home," she concluded. "Save a life, wear the damn mask.”

I've looked all over the site and can't seem to find any coverage of the latest hypocritical display put on by our illustrious Governor, Gavin Newsom. You are aware that he was caught this week attending a dinner party, indoors and not wearing masks violating his own orders? Even our local KUSI had coverageof that one. It almost seems like only conservative politicians get bad press coverage on this site, but then that wouldn't be "nonpartisan", would it. SMH

As Liz noted. It's our politics section three days before your comment, which you'd have seen if you bothered to look before posting baseless criticism.  We have always included critical coverage of political leaders in both parties who do controversial things.