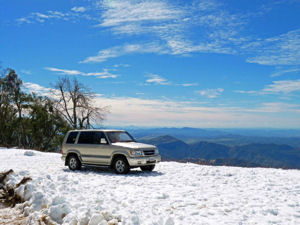 By Miriam Raftery
March 18, 2012 (Palomar) – Friends of Palomar Mountain State Park announced this week that they have reached and exceeded their fundraising goal to fill the budget gap between the park’s operating expenses and revenues. The group received nearly $72,000 in pledges—far more than the $60,000 sought.

“At this point, the contract has been tentatively accepted,”  Rick Barclay, spokesman for the organization, told ECM.  “It’s looking really good, but the signatures aren’t dry.”  The proposal must first be approved by the State Parks budget committee, then signed by the Director of State Parks and leaders of the nonprofit organization leading efforts to save the popular attraction.

Barclay says he’s received positive reactions from state park representatives.  “We’re combating the closure. We’re not combating Sacramento. They really want it to stay open,” he said.
ECM played a key role in the effort.  After receiving a fundraising request from the organization, ECM editor Miriam Raftery made a personal pledge and published a story on the effort, also posting the article on ECM’s Facebook page and Tweeting a link on Twitter.  The next day, funds raised had soared from $9,000 to over $30,000, including a $1,000 pledge from an ECM donor and  a matching pledge offer from another major contributor.  ECM’s editor then forwarded a link to a representative from the Anza-Borrego Desert Park Foundation, who in turn posted the issue on the Anza Borrego State Park website.
“I am delighted to hear that this historic and beautiful park, one of our region’s true scenic treasures, can now be preserved for the public to enjoy,” ECM editor Miriam Raftery said upon hearing the news. “I hope the State Parks Service will support the many people in San Diego County who have demonstrated their willingness to help the Park Service meet its financial costs, so that Palomar Mountain State Park can remain open to the public.”
For more information on Palomar Mountain State Park and the efforts to save it, see http://eastcountymagazine.org/node/8419 ,  http://www.eastcountymagazine.org/node/8534   and http://www.savepalomar.org.