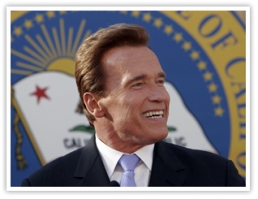 January 15, 2009 (Sacramento)--Governor Arnold chwarzenegger refused to deliver a traditional state-of-the-state address today "because the reality is that our state is incapacitated until we resolve the budget crisis," he said during today's address in Sacramento. (Video of speech: http://msmedia.dot.ca.gov/governor/20090115_state.asf; text of speech: http://www.sacbee.com/static/weblogs/capitolalertlatest/018621.html)

"People are asking if California is governable," Schwarzenegger said. "They wonder about the need for a constitutional convention. They don't understand how we could have let political dysfunction paralyze our state for so long." The Legislature's failure to approve a budget has suspended state funding for 2,000 construction projects around the state that were already underway, including Highway 52 in East County. Projects stopped when state officials determined the state might need to divert money for them to pay ongoing operating expenses for schools and other vital state services.

With a $42 billion deficit looming, "California faces insolvency within weeks," the Governor warned. "So now, the bulldozers are silent. The nail guns are still. The cement trucks are parked. The disruption has stopped work on levees, schools, roads, everything," the Governor said. "It has thrown thousands and thousands of people out of work at a time when our unemployment rate is rising."

During the Governor's address, hundreds of people gathered outside the State Capitol to protest funding cuts for Medical, home health care, public education and other programs. http://www.sacbee.com/capitolandcalifornia/story/1543492.html Schwarzenegger did not offer a specific solution in his speech, though he did propose that legislators go without pay until a budget is in place.

In November, however, he called for tax hikes to fill the budget gap, adding, "It is now a revenue problem rather than a spending problem." That's a clear change from last year's State of the Union address, when the Governor blamed the budget crisis on a spending problem rather than a revenue shortfall. But Schwarzenegger refused to sign a year-end budget bill passed by the Democratic-controlled Legislature, which contained fee increases to balance the budget. Republicans in the Legislature maintain that deeper spending cuts, not revenue increases, should be made to solve the state's fiscal crisis.