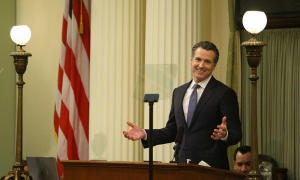 February 13, 2019 (Sacramento) - A month after being inaugurated, Gov. Gavin Newsom used his State of the State speech Tuesday to make his strongest showing yet that Jerry Brown is no longer in charge.

He proposed scaling back two of Brown’s legacy projects—a high-speed train and a pair of tunnels to move water from north to south. He rescinded Brown’s deployment of California National Guard troops to the Mexican border. He voiced support for education and housing policies that Brown stayed away from.

January 15, 2009 (Sacramento)--Governor Arnold Schwarzenegger refused to deliver a traditional state-of-the-state address today "because the reality is that our state is incapacitated until we resolve the budget crisis," he said during today's address in Sacramento. (Video of speech: http://msmedia.dot.ca.gov/governor/20090115_state.asf;
text of speech: http://www.sacbee.com/static/weblogs/capitolalertlatest/018621.html)