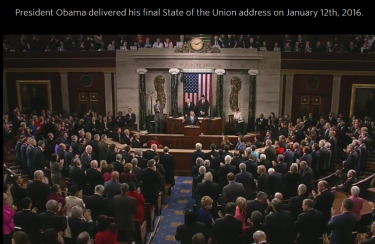 January 14, 2016 (Washington D.C.)—In his final State of the Union address, President Barack Obama cited his administrations achievements and goals for his final term.  But he spent most of his speech focusing on “the next five years, ten years and beyond”, urging an end to divisive partisan politics.

Obama voiced hope for bipartisan support to enact criminal justice reforms. He indicated he will keep pushing to fix a “broken” immigration system, protect kids from gun violence and help workers by raising the minimum wage and fighting for equal pay for equal work, despite opposition from the Republican-controlled Congress.

Then he spoke about changes that have occurred throughout our nation’s history—and changes yet to come.