View video including interview with Mark Robak and GUHSD board hearing on the Steele Canyon charter issues: click image at left or visit  https://youtu.be/9cZj0ZmsKzY

The charter school in Spring Valley landed in hot water with the district and the parents after a newly elected board member discovered significant discrepancies between the old and the new bylaws up for vote two weeks ago in the governing board. Mark Robak, a local businessman, joined the board on October 9 and by the end of the month, he was sending petitions to the school principal and the district objecting to irregularities with the authorization process and the bylaws.

Robak was joined by Vice-Chair Tim Abbott, who alone fought the school’s governing board majority in a meeting on November 6th not to vote the Bylaws as is and to include the parents in the decisional process. Abbott lost in a 6-1 vote  and the new bylaws were adopted at a special meeting scheduled when Robak could not attend, due to Robak’s duties as an Otay Water District board member.

Robak’s and Abbott’s main concerns are about a newly introduced statement into the bylaws that modifies the number of votes needed to exclude a member (from five to four out of seven voting members).

Moreover, citing the need to update the bylaws to comply with corporate code, the board’s CEO and school Principal Scott Parr defended another significant change: the board could vote to remove a member “with or without cause.”

In addition, the charter committee that prepared the application for reauthorization excluded the parents from the decisional process. Robak alleged the changes were not communicated to the board and no redlined version was provided in a timely manner to offer ample time to read the documents and become aware of these significant changes, actions that he contends violates California’s open government laws.

Therefore, for the first time since the charter’s creation in 2000, the sponsoring district GUHSD denied Steele Canyon’s application for renewal during its regular board meeting last Wednesday. Several of the district board members were incensed by the findings. The meeting took a dramatic turn with Principal Parr being figuratively roasted in a public setting.

Therefore, by the end of the evening, GUHSD board member Elva Salinas had withdrawn her motion of approval, while Robert Shield told Parr to “come back when you’re ready” and “give me a heck of a lot of good information.”  Shield and Jim Kelly were the most passionate grillers who kept pressing Parr for clarifications and getting frustrated by Parr’s answers or rather lack of. However, the district board members ended up appreciating the lack of emotions on Parr’s part with Shield saying, “I envy your cool,” given the circumstances.

Kelly focused on the new bylaws rule to allow a simple majority to remove an elected member on the governing board of the school. 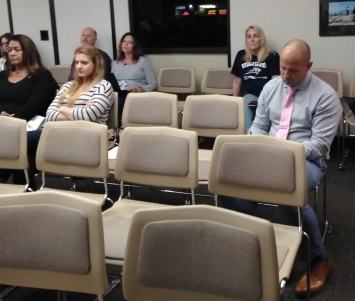 Parr (photo, right, with Steele Canyon board chair Stacy Achenbach behind and parents on the left) said, “I don’t have a preference in that case. It was how it was recommended to us. The reason for change is that our legal team recommended to meet current corporate code.”

Kelly responded, “But you don’t answer. Every time when I ask to explain why include the “without cause,” you basically say, that’s the way it was recommended, but you don’t say the reason. … In fact, I am not getting a straight answer from you.”

Visibly frustrated, Kelly added, “Here’s where I see it. It’s almost like you guys want not just a majority, but a super duper majority”  then suggested the motive may be to “eliminate anyone that may have a dissenting opinion.” Kelly said, “Now I think this is horribly undemocratic. I’ve never heard of something like this, that the parents could elect someone that the board members can vote off the board.”

Following Robak’s allegations that he found out about these changes in the last minute, Kelly said, “Now it seems to me that this is something you and your people are trying to sneak past either one of your board members and maybe sneak through our district.”

Addressing Parr, Kelly stated, “As it is, I am not gonna vote for,” adding, “because this is bad faith and I don’t think you’re being clean with me.” He continued, “This to me is very, very serious, very suspicious. I’ve been a board member here for 27 years and I’ve never seen anything like this on any board. …This is unprecedented, it is patently undemocratic.”

Then it was Dr. Gary Woods’ turn to react in shock when Parr confirmed that every majority could get rid of any minority “according to the bylaws that are voted.” Woods exclaimed, “But these are elected officials that are being removed by the board members!”

Shields said, “I am nervous about this application.”  He added that while he could understand the legal team’s recommendations about removing board members, he does not believe it was an attorney’s idea to reduce the number of voters from five to four. “Somebody, somewhere in authority, I have no idea if it’s a staff member or I don’t care who at this point, has seen fit to give a simple majority incredible power over a minority who may disagree with whatever policy comes up.” Shields compared the district board with the governing board at Steele Canyon and stated,” We don’t have anything close to that authority here.”

The district board requested that Parr provide a complete redlined version of the application for renewal before the next meeting, that is yet to be scheduled.

After the meeting, Robak pointed out, “All the money that runs the school comes through taxpayers dollars from the parents. The parents support the school. If the school wants to adopt something as undemocratic as they were trying to do, I say, “Shame on them” because this is the public’s money. If there’s a private company, that’s one thing. Public’s money, totally different. “ Robak said he expects the board to meet soon and work on these issues. “I will not give up “ he pledged.

Maxine Raider, a parent of a student attending Steele Canyon, said, “I don’t agree with the adjustments of the bylaws.”

Stacy Achenbach, the chair of the school’s governing board who pushed for the vote on the bylaws, said, “I am not interested to give a statement,” when asked to comment about the district’s decision and to respond to parents’ concern about the recent developments at their kids’ school.