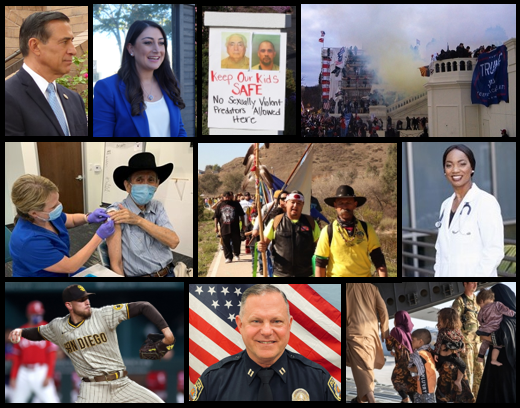 December 29, 2021 (San Diego’s East County) – Turbulent times continued in 2021, marred by a persistent pandemic, vaccine rollouts, political divisiveness including an insurrection at the nation’s capitol, and local controversies such as growing homelessness, a housing shortage, power outages, protests over mask mandates, and SANDAG’s proposed mileage tax, to name a few.

Some national issues, such as pandemic relief, the infrastructure bill, the end of the Afghanistan war, and court rulings on immigration had strong impacts on our region.

Two new Congressional representatives from East County took office and a special election sent a new Assemblywoman to Sacramento, while redistricting at year’s end will bring even more sweeping changes in 2022.

Below is a rundown on the top stories that impacted East County in 2021: