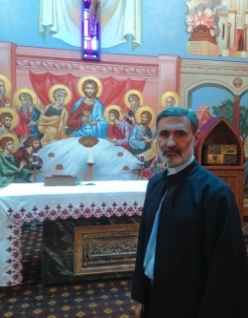 July 10, 2016 (El Cajon)—In January 2015, Pope Francis issued a ruling to protect Father Noel Gorgis, a popular, zealous priest at St. Peter’s Chaldean Cathedral in El Cajon, as ECM reported. The Pope invalidated a decree issued by Patriarch Mar Louis Raphael Sako, which would have required Father Noel and several other U.S. priests to return to Iraq, where the Islamic State has been slaughtering Christian religious leaders. The Pope’s action was applauded by local Chaldean leaders. Father Noel has been a leading voice locally and nationally, on behalf of Chaldean-Americans and Chaldean immigrants.

But now the new interim Bishop for the St. Peter Chaldean Catholic diocese of San Diego, Shlemun Warduni, has issued an order for Father Noel to leave St. Peter’s effective Friday, July 15, 2016, multiple church sources have confirmed.  Bishop Warduni is a temporary replacement for Bishop Sarhad Jammo, who recently retired and had been a defender of Father Noel, as ECM reported.