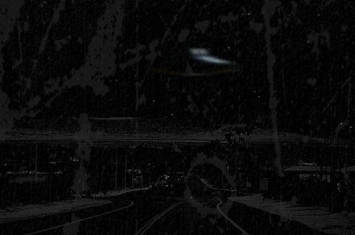 April 1, 2022 (Borrego Springs) -- Early this morning, at about 1:15 a.m. residents in the sleepy town of Borrego Springs were awakened when a strange sound emitted from the sky. The sound was hard in a five-mile radius from the town. Some of the townsfolks stepped outside hoping for an answer to their disturbed sleep.

Witnesses describe the source of the sound as a strange metal disc with an indent in the center, almost looking like a CD. Others describe it as something out of a science fiction film from the ‘80s. It hovered above the town before zooming out further into the desert. It was gone in an instant, leaving no trace.

During this encounter the residents found that their cellphones, cameras, and other electronic devices around their houses did not work. When the UFO darted out into the desert, the devices started working once again.

“The incident overnight was caused by a gas leak which caused a moment of mass hysteria. This morning the gas leak problem, has been resolved and we can get to our daily routines,” a spokesperson from SDG&E stated.

While some believe this, others are doubtful noting that while a gas leak might explain odd sounds, it would not account for the visual observations.  Some insist what they saw early this morning was a real encounter with a UFO.

A photographer who would like to stay anonymous was using an older camera that was not affected by electromagnetic pulse (EMP) disruptions.  He sent in this picture the flying object, depicting what he believes was the UFO. The picture, while blurry, seems to have a figure of an object zooming across the sky out toward the desert.

“Like yeah man, I was out there in the desert taking pictures of the night sky when all of sudden this thing came flying in really fast. It was really trippy, so I got my camera and began taking some pics. Then it just flew out. I thought I was dreaming, you feel me?” explained the photographer, Sandy Dunz.

Legends of UFOs have circulated in local media for decades now across the U.S., usually taking place in secluded smaller towns, such as the famous Roswell, New Mexico Incident. Most recent sightings are reported on social media including sites like Twitter and Facebook. While many sightings are suspected fakes for clout on these social media sites, a few have defied explanation.

Some cases include claims of people disappearing following such an event, with reappearances days to weeks later, and the persons having no recollection of what happened to them or where they had been. So it may be safest to stay inside if you spot a potential extraterrestrial visitor in East County.

The encounter in Borrego Springs only lasted a few minutes, but other reports claim that a similar looking object was seen over the Salton Sea before vanishing into the unknown, perhaps bound for Las Vegas.