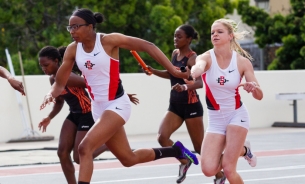 The 4x100-meter relay team of senior Starlynn Singleton, junior Simone Glenn, senior Micha Auzenne and junior Ashley Henderson took third with a 44.37 time, the fourth fastest in program history, to qualify for the Championship Invitational on Friday at 1 p.m. (ET).

In the college women’s 400-meter hurdles, freshman Andrenette Knight tied her collegiate best and the sixth-fastest time in SDSU history at 58.44 to place fourth.

On Friday, the day starts with sophomore Je’Neal Ainsworth’s appearance in the triple jump at 11 a.m. (ET). The College Women’s 4x100 Championship of America Invitational is at 1 p.m. (ET), with the 4x200-meter relay heats to follow at 2 p.m. (ET). The College Women’s Shuttle Hurdles Championship of America Invitational is scheduled for 3:25 p.m. (ET), and the 100-meter dash (Henderson) is slated for 3:40 p.m. (ET). At 4 p.m. (ET), Auzenne and Sierra Brabham-Lawrence compete in the 100-meter hurdles, and junior Melody Harris will throw the javelin at 4:45 p.m. (ET). The day concludes with the 4x400-meter heats at 4 p.m.