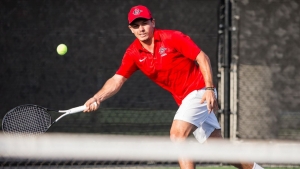 After dispatching Villanova’s Tommy Mulflur and Stefan Agustin Suarez in the opening round, 8-5, Kirchhoff and Martinez kept things rolling with a monumental victory over Nishimura and Griffith, who advanced to the round of the 32 at the NCAA Championships last year as seniors at the University of California.

The Aztec tandem followed with a 8-5 decision over UCLA’s Eric Hahn and Matthew Tsolakyan, but fell short to Pepperdine’s Enrique Luque Rico and Matias Sborowitz by an 8-3 tally in the round of 16.

SDSU’s Arnaud Restifo and Fabian Roensdorf also advanced in the bracket to the round of 16, with the tournament featuring extra matches on Friday due to impending rain later this weekend.

Restifo and Roensdorf, who notched their first victory on Thursday evening, picked up right where they left off, edging Boston College’s Derek Austin and Sean Mullins in a tiebreaker earlier this afternoon, 9-8(5), before recording an 8-3 conquest of UC San Diego’s Zachary Ermert and Richard Han. The Aztec combo had their progress stymied, however, suffering a narrow 9-7 setback to brothers Colter Smith and USC senior Tanner Smith, whose father, Peter Smith, is the Trojans’ head coach.

In addition, Nicholas Mitchell and Gavin Spencer claimed a pair of decisions for the Scarlet and Black on Friday. The Aztec tandem opened with an 8-2 triumph over UC Davis’ Daniel Landa and Alex Scemanenco, followed by an 8-2 pasting of unattached Phillip Martin and Matthew Sah. However, the SDSU teammates were unable to replicate their success against Oklahoma State’s Mathieu Scaglia and Maksim Tybar in the round of 32, where they experienced an 8-4 defeat.

After receiving a first-round bye, David Hough joined forces with Aztec women’s tennis assistant coach Nicolas Vinel to split a pair of matches, dismissing unattached Brandon Beardsley and Rodolfo Bukich, 8-3, before falling victim to Stanford’s Jack Barber and William Genesen, 8-2, in the round of 32.

Elsewhere, Sander Gjoels-Andersen and Rafael Gonzalez Almazan, who opened with a victory on Thursday, had their hands full against UCLA’s Bryce Pereira and Patrick Zahraj in the round of 64, where they wound up on the wrong side of an 8-1 score.

Rounding out the action for SDSU were head coach Gene Carswell and assistant coach Jeff Thomsen, who were upended by Ball State’s Lucas Andersen and Tom Carney in the opening round 8-5.

San Diego State returns to action on Saturday, March 16 when it plays host to No. 35 San Diego at Aztec Tennis Center. Match time is set for noon.