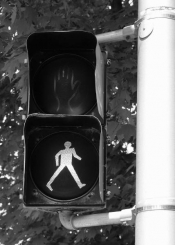 November 14, 2014 (El Cajon)—An 87-year-old man died at a local hospital after being struck by a vehicle in the 600 block of El Cajon last night shortly before 5:30 p.m.  Witnesses told police that the man walked into the roadway from the center media, following two family members. He was wearing dark clothing and appeared unaware of the vehicle traffic.

April 19, 2014 (La Mesa)—Louis Bernath, 92, of La Mesa died April 10th of injuries sustained when he was struck by a vehicle while out walking on April 1st on Parkway Drive in La Mesa.