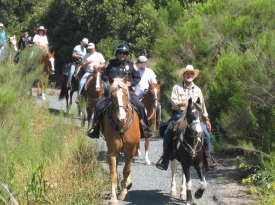 Supervisors Dianne Jacob and Bill Horn proposed the ordinance over two years ago.

“One of the reasons we did this is we heard from constituents that our equine ordinance was out of date, preventing the equine industry from thriving in our community,” Vice Chair Jacob said, adding  that the new tiered ordinance will “streamline the process and reduce costs to consumers” for stabling horses yet still protect surrounding property owners and preserve the “culture of our backcountry.”

Supervisor Horn said he believed it’s “important to do this,” noting, “There aren’t as many horses anymore… They’re a big part of the community.”

The measure, which has been recommended by the County Planning Commission, would do the following:

The new tiered ordinance has been in the works since 2011 and has gone through environmental review with public comments earlier this year.

Carl Steele, the county’s project manager who did a PowerPoint presentation, noted, “Current law requires you get a major use permit as a commercial venture if you stable more than one horse that you don’t own.” An environmental impact was done that considered factors ranging from compost to pesticide use to setbacks and parking. Staff met with 10 planning groups and found “substantial support at most.”

Our unincorporated areas have properties that average 3.5 acres, with two acres as median sizes. 50-60% of the land area is used by horses, and it’s busier on the weekends. Other counties allow more horse per acre than San Diego. San Diego and Los Angeles have eight per acre in agricultural zones, and Riverside and San Bernardino allow four.

The new ordinance will allow up to 10 horses per usable acre owned, but fewer when a portion of a lot already has a structure or steep, unusable land.

Objections centered mostly around the number of horses per acre; some wanted to see fewer. Twenty comment letters were received and changes were made to address some of those issues, staff indicated.

Sweetwater Authority withdrew its initial objection over water quality concerns after staff added mitigation measures. The district is unusual in that it relies largely on runoff water.

Oliver Smith, chairman of the Valley Center Planning Group, spoke first from the public. He said this will “remove the Sword of Damocles hanging over the heads” of many existing horse owners out of compliance. He asked for options to offer riding lessons as long as there’s no signage. He thought seven horses per usable acre would be reasonable instead of 10. But he added, “I look at this ordinance change as positive for horse owners.”

A realtor said she had some concerns initially about property values, but most have been addressed. She noted that people who move to an area zoned for stables should be aware that one could be built next door. She wants to see evacuation of horses addressed.

An Escondido resident said 10 horses per acre is “too dense.” She felt four horses per acre fits better with the community plan and voiced concern for a sensitive creek. She also wanted more restrictive sign ordinances in communities to be upheld.

Sally Cobb, Valley Center resident, said wholesale plant growers have put up with “unsightly greenhouses” and are spraying with chemicals. “I agree with Tier One”, she said but added she had problems with Tier Two. “I personally don’t want to live near 50, 40, or even 30 horses.” She said it’s “impossible to mitigate” with so many. She thought three to five per acre was more appropriate but noted “each community is different; from what I’ve heard Lakeside wants 100 per acre!”

Another Valley Center resident said she had a boarding establishment next to her and there were many complaints. She says on a small parcel only five horses are “possible to manage.” Odor and manure are problems, she said.

Jim Whelan, San Diego Equestrian Foundation, said the county “seems to be getting the hang of tiered ordinances,” referring to a successful boutique winery ordinance that has resulted in proliferation of Mom and Pop tasting rooms in the backcountry. He thanked staff for taking the time to understand the “quirky ways of horse people” and he said she completely supports the ordinance.

An Alpine woman said these efforts reflect a “new attitude of county staff to actually treat the people who live here as clients.” She represents four property owners who wanted lodging for ranch hands on larger properties. “I think what you have puts together the needs of the community”, she added.

Bill Donaldson, who owns a horse ranch in Fallbrook, said the ordinance reflects “common sense” and can be a model for other communities in CA because “it makes sense to common people. There are three tiers, most people can count to three.”Businesses will know what to do, he said, adding that this will “generate spinoff tax revenues to the county” from equine related businesses. He noted that riding students couldn’t be present as they are in school but would support this.

A Point Loma woman said “passage of this could be vital to the future of the horse industry in California.”

Deborah Boroughs said she was “thrilled to realize my lifelong dream of owning a horse ranch.. for the past three years.” She lives next door to a stable and “everything in my property is coated with a fine coating of manure, even dishes in my cupboard.” She brought a glass to prove her point. She said she has asthma and her dog has an eye infection that she believes are due to air quality concerns. Her neighbors have 13 horses. “I can’t even imagine 20 horses on two acres… it’s not fair to the owner who purchased in good faith” next door. She wants to see fewer horses per acre, two, and “serious teeth” for reinforcement.

Jacob told Boroughs to meet with a staffer and said existing laws apply (i.e. this is a code enforcement issue that should protect her).

Staff clarified that signage will be 20 square feet under the ordinance max. Steele also said that “riding lessons will be allowed under Tier 1. Events are allowed already in stables... We have stormwater.. manure regulations..”

Horn gave his opinion. “I want to thank staff for this. This is a business ordinance.. Agriculture is now being interfaced with a lot more dense area… when I first had my ranch, we didn’t have that problem…I’m happy with this.” He said horses are “why a lot of people own out there and live out there.”

He moved to add Tier One lighting, then moved to approve the EIR. Jacob seconded and moved to add use of riding lessons into Tier One.

Jacob said reducing regulations will “enhance the horse industry” and told constituents that “if there are any issues that come up, I want to hear from you.” She added that “San Diego is horse country. There is a domino effect.” The ordinance will create more jobs because people will need saddles, feed etc. similar to wineries creating more jobs, she believes.

East County’s Supervisor concluded “This is another element of our agritourism industry” that will bring “economic benefits to our region and to horse owners.”

After the vote, happy horse owners in the audience applauded, without a single “nay” vote cast.