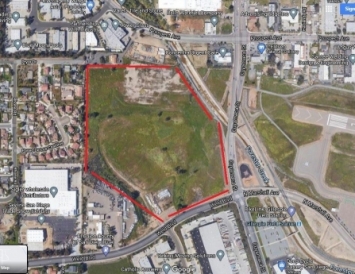 Update: This was unanimously approved by Supervisors.

March 4, 2021 (El Cajon) – San Diego County Supervisors will hold a hearing March 17 on construction of a proposed distribution warehouse that the developer plans to lease to Amazon.com.

The site, which is zoned industrial, is located at the northwest corner of Cuyamaca Street and Weld Blvd. near Gillespie Field. Although the County owns the land, the city of El Cajon has land use authority, but has not yet approved the project.

At a Supervisors’ meeting this week, the county delayed action until environmental studies can be reviewed. The County is relying on an environmental review done by the city of El Cajon in 2009 for a separate project, but public speakers contended that an updated environmental impact study is needed along with review under the California Environmental Quality Act (CEQA).

Some residents have objected to plans for 24-hour delivery services, seven days a week, citing concerns over backup beeping noise and traffic concerns. The plan calls for around 75 vans to leave the delivery station in the morning between 9:50 and 11:10 a.m., returning in the evening between 7:10 and 9:10 p.m.

The project, if built and leased to Amazon.com, the world’s largest retailer, could bring hundreds of jobs to East County.  Supervisor Joel Anderson, whose district includes the site, has stated in an e-mail to constituents that the project “lifts the poor in my district.”