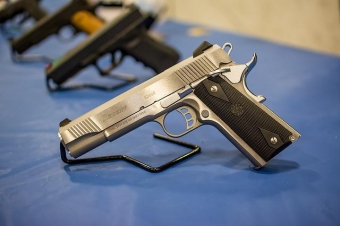 Last week’s 6-3 ruling by the high court, with the conservative justices in the majority and liberal justices in dissent, threw into question gun-control laws across the country.
The justices’ actions mean that lower courts that allowed gun restrictions will have to reconsider many decisions, including Maryland’s ban on “highly dangerous, military-style assault rifles,” bans by both California and New Jersey on magazines with more than 10 rounds of ammunition, and Hawaii’s ban on openly carrying firearms in public.
In California, the firearms coalition filed a motion to lift the stay that was imposed last year after a district court in California struck down the state’s ban on assault weapons.
“The people of California have endured for long enough,” said Matthew Larosiere, policy council for the firearms coalition. “We are eager to see this stay lifted and one more nugget of freedom restored in the Golden State.”
And the group sent a letter to California Atty. Gen. Rob Bonta warning him against a “good moral character” requirement in issuing concealed-carry permits. Bonta said last week that while counties could no longer require applicants to demonstrate “good cause” for carrying a concealed weapon, they must still demonstrate “good moral character.”
The firearms coalition argued that the Supreme Court’s ruling allowed only objective criteria in determining whether to issue a permit and that “government agents don’t get to decide on a piecemeal basis who does and does not” get to carry weapons.