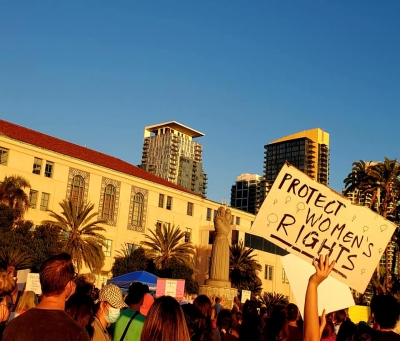 That means abortion becomes illegal in 26 states immediately due to trigger laws or older statutes on the books, many banning abortion even to save a mother’s life or prevent a rape or incest victim from being forced to give birth. More states are poised to consider banning or restricting abortion, while Republican leaders have pledged to seek a nationwide abortion ban if they regain control of Congress in November.

Today’s decision has sparked protests nationwide, including thousands protesting outside the Supreme Court and justices’ homes this evening, as well as a large crowd gathered in San Diego outside the County adminstration building at Waterfront Park.