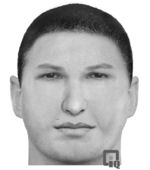 On Sunday, January 1, 2012, at about 8:30 p.m., the victim was walking home from work on the bike path near 4000 University Avenue at Teralta Community Park when she was confronted by the suspect. The male asked the victim questions she did not understand due to a language barrier and tried to explain that to him. The suspect grabbed the victim and tried to gain control of her. She fought with him, but he pushed her to the ground where he beat and sexually assaulted her. The suspect finally stopped the attack and walked away northbound on the bike path.

The suspect is described as a mixed race or light-skinned black male in his 20’s. He is between 5’8” and 5’11” tall and weighs 180-200 pounds, with a muscular to heavy build.  He is said to have a round face, no facial hair and thin lips. At the time of the assault, he was wearing a white t-shirt and shorts that went below the knee with white stripes on the outer seams.
Anyone with information concerning this assault is asked to contact the San Diego Police Department’s Sex Crimes Unit at (619) 531-2210 or San Diego County Crime Stoppers at (888) 580-8477.