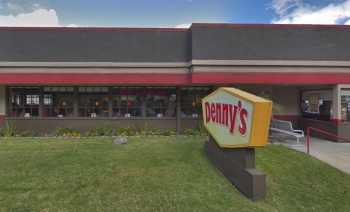 By Miriam Raftery
March 6, 2019 (La Mesa) – La Mesa Police have arrested four suspects accused of carjacking a taxicab early this morning at the Denny’s Restaurant on Alvarado Road. GPS tracking on the taxi enabled officers to quickly locate the vehicle and nab the suspects nearby.

Officers were called to the scene at 1:03 a.m. after the victim, a driver with Blue Star Cab, reported that after he responded to a call to pick up four riders, the suspects entered the taxi and argued over the fare. Two suspects reportedly punched the driver. A suspect who had been in the front passenger seat then slid over to the driver’s seat and pointed a gun at the driver, who exited the vehicle.

The suspects fled in the vehicle. Officers worked with the cab company to find the stolen taxi at 1:19 a.m. on U.S. Elevator Road in Spring Valley. A firearm was recovered from the vehicle.
A search of the area commenced with help from the San Diego Sheriff’s office. All four suspects were found within a block of the taxi and were detained at 1:39 a.m.  The victim and a witness identified the suspects in a field lineup.
The driver suffered a laceration and minor swelling to his face, but refused medical treatment.
The four suspects were arrested and charged with carjacking and conspiracy. The suspects are Jacob Ronald Jensen, 18, of El Cajon, Jaden Razell Jones, 19, of Spring Valley, Kaitlyn Arianna Gendleman, 19, of El Cajon, and a 17-year-old male juvenile.
If anyone has information related to this incident, they are asked to call the La Mesa Police Department at 619-667-1400 or the Crime Stoppers’ anonymous toll-free tip line (888) 580-TIPS (or www.sdcrimestoppers.com).

Starting out so young in their lives of crime. Possible ruined future for these youngsters.