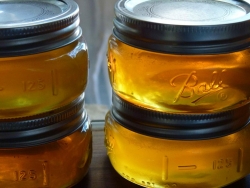 This year, beekeeper Dave Yarbrough from Upper Deerhorn Valley entered his honey in a blind tasting sponsored by the San Diego County Beekeeping Association at the San Diego County Fair.  It tied for first place, and was ultimately awarded second place on a tie breaker.

“So... for the third consecutive year Deerhorn Valley honey has grabbed a top award,” said Hamilton, also a homemade honey-maker.  “The honey flow is really just beginning this year, so beekeepers are all hoping for a more productive year than 2011... which produced a first-place entry but was exceedingly scarce.”