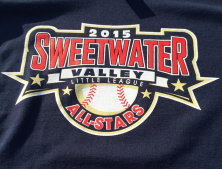 The Sweetwater boys in blue jerseys, representing the West, will play Texas on Thursday night.  The winners of Wednesday’s and Thursday’s games will then play each other in the U.S. Championships on Saturday.

Sweetwater Valley’s players didn’t really need to work their bats to score in the top of the first inning on Tuesday night; two singles, a walk, two errors and a passed ball did the trick and gave the West a 3-0 lead.

Levi Mendez added to the slaughter in the second inning with a line drive that scored two runs, increasing the lead to 5-0 with two outs.

Bowling Green didn’t give up easily.  In the bottom of the fourth they threatened to close the gap, but reliever Nate Nankil ended the damage with a strikeout to end the inning.

After a drought for Sweetwater in which they endured six strikeouts, Antonio Andrade homered to make the lead 6-2.  After Nankil doubled and scored, the lead increased to 7-2.

Sweetwater had another scare in the fifth inning when Kentucky homered, but Andrade ended the inning with a nice throw to third to get the runner and end the inning.

After another onslaught of four runs in the sixth, Nankil closed out the game for the save.  Starter Nate Schmid earned his second victory of the series.

You can watch the boys on Thursday against Texas, Wednesday night’s winner, at 5 P.M. on ESPN.