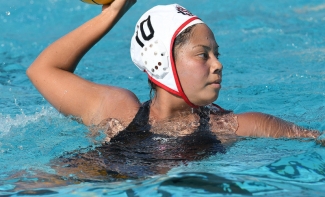 February 3, 2018 (Providence) - T-No. 13 San Diego State opened its season with a 10-8 neutral-site victory over 19th-ranked Harvard Saturday afternoon at the Bruno Classic in Providence, R.I. SDSU moved to 1-0 with the win, while the Crimson fall to 2-2 on the year.

Hannah Carrillo scored the Aztecs’ first goal of the season less than three minutes into the contest and was joined in the scoring column by Shelby Kraft and Emily Bennett to help SDSU go into the second quarter ahead, 3-2. Mathilde Ribordy scored both of Harvard’s goals to keep the dark caps within striking distance.

The Crimson’s Sofia Carrerra-Justiz leveled the score at nearly the same point that Carrillo scored her goal in the first period, but the Aztecs responded with single tallies from Carrillo and Bennett. Harvard countered with successful strikes from Gorlinski and Pursell pull even again with SDSU, which answered with Kraft’s second goal of the game and Carrillo’s third, all in the final 1:47 to put San Diego State up, 7-5, at halftime.

The teams traded goals in the middle part of the third quarter with Haley Bowe finding the back of the net and Carrillo posting her career-best fourth goal to keep SDSU’s cushion at two (8-6). Consecutive goals by Harvard (Ribordy, Carrera-Justiz) tied the score for a third time with 1:52 to go, but senior co-captain Courtney Jarvis gave the Aztecs some breathing room with 22 seconds left in the period.

When play resumed, Paola Vizcarra helped SDSU start the final eight minutes on a good note when she scored just 30 seconds into the frame. The Aztecs’ defense, led by goalkeeper Mauri Cantoni, took over from there, and shut down the Crimson attack as SDSU’s captured the two-goal decision.

Cantoni made seven saves between the pipes and her effort helped keep Harvard, which came into the game averaging 12.7 goals per contest, off the scoreboard for the final 8:52 of the game.