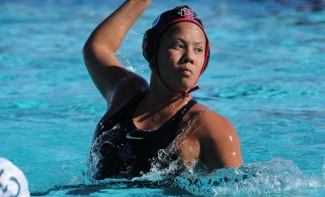 February 4, 2018 (Providence) - T-No. 13 San Diego State rallied from an early two-goal deficit to defeat T-No. 25 Brown in its home pool in overtime, 5-4, to wrap up Bruno Classic action in Providence, R.I. The Aztecs leave the east coast with a 2-2 record, while the Bears fall to 2-4.

The hosts took a 2-0 lead and carried the advantage into the final minute of the first quarter until Katrina King got the Aztecs on the scoreboard. SDSU used that goal to create a bit of momentum and received goals from Mary Myers and Shelby Kraft to take a brief 3-2 lead. Brown scored 67 seconds after Kraft to tie the score going into intermission.

Defense was on display for the entire afternoon, but none more so than in the third quarter when each team took the other’s best shot. The result was a scoreless third, but that did not last long into the fourth period when Carmen Rosas scored her second of the game in a power-play situation. Then with time running out, Hannah Carrillo provided the equalizer with 2:44 left in regulation and the contest eventually moved to overtime with the score knotted at 4.

In the first extra frame, Carrillo was at it again and nearly scored with the same amount of time left on the clock as her first goal. Her second of the day came with 2:36 left and the score held at 5-4 as the teams switched sides. Following a brief break, action resumed and SDSU did not allow Brown to get any good looks offensively and finished the two-day tournament with a win.

Emily Lowell made a game-high 12 saves and helped shut down a Bears attack that was averaging 9.0 goals per game.

The Aztecs will return to America’s Finest City to prepare for next weekend’s Triton Invitational at UC San Diego. SDSU will face UC Santa Barbara on Saturday at 9:50 a.m. PT in Canyonview Pool.