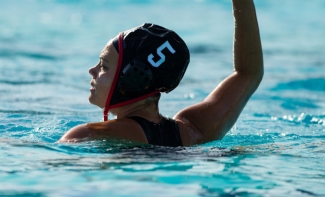 February 17, 2018 (Newport Coast, Calif.) - T-No. 14 San Diego State, which earlier in the day defeated Concordia in its Golden Coast opener, completed its trip to Orange County with a 13-6 exhibition win over the University of Toronto at Sage Hill School in Newport Coast.

SDSU, which did not suit up a single senior, let the underclassmen get some work in against a Varsity Blues team that had faced four Division I teams this season. The score was tied, 3-3, after one period with San Diego State moving out in front, 7-3, by halftime after a dominating 4-0 second quarter.

Toronto closed the gap with a 2-1 third period, but the Aztecs still found themselves ahead, 8-5, as the game moved to the final eight minutes. It was in the last frame that SDSU put any thoughts of a comeback to rest as it outscored the Varsity Blues, 5-1, to coast to the victory.

Isabella Solis led the Aztecs with three goals, while Karli Canale and Maddy Parenteau each contributed two goals. In net were Emily Lowell and Mia Harris, who both made three saves.

“Once again, we really showed our depth throughout our roster. It was great to see a lot of first-year Aztecs score their first collegiate goals. We had great defense and it was a total team effort.” – Head Coach Carin Crawford

Eight freshmen recorded stats in the exhibition and zero seniors suited up for the game.

The Aztecs had 11 assists on 13 goals with four being credited to Emily Bennett, who did not record a shot, but leads the team in goals with 15.

San Diego State will face Hawai’i next Friday in the first game of the Barbara Kalbus Invitational at 3 p.m. The game will be played at UC Irvine.