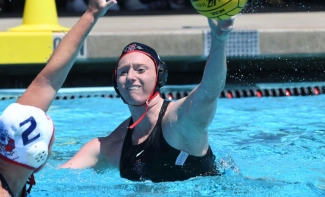 The teams got off to a slow start offensively, as neither team scored for the first five-plus minutes of the first quarter. It wasn’t until Shelby Kraft put her shot past Lydia Dadd with 2:18 left, that someone dented the scoreboard, giving SDSU a 1-0 lead. Unfortunately for the Aztecs, UOP’s Maddy Gomes found the back of the net with five seconds left to level the score after one period.

SCU moved in front thanks to a Hannah Buck goal just over two minutes into the frame. Hannah Carrillo provided the equalizer with 3:59 left, only to have Elise Floreani score her only goal of the game, pushing UOP to a 3-2 lead with less than two minutes to play, a lead it would not relinquish at halftime.

The Aztecs wasted little time in the third quarter as Emily Bennett scored 36 seconds into the frame to knot the score at 3-3. SCU’s Hannah Buck answered with a goal just as the clock dipped beneath the 5:00 mark, but Carrillo was up to the challenge, tucking her shot past Dadd with 3:39 to play in the fourth to knot the score at 4-4. San Diego State rode its momentum into the fourth and it provided another Jarvis goal, this one coming with 2:06 left in the third, which gave SDSU a 5-4 lead leading into the final eight minutes

San Diego State maintained its one-goal lead for the first few minutes of the fourth quarter until Santa Clara’s Hailey Eberle knotted the score with 4:55 to play. Carrillo put SDSU out in front with another goal-scoring effort with 90 seconds to play and the Aztec defense held strong to secure the game for the Aztecs.

Hannah Carrillo recorded her second straight hat trick, marking her 10th straight game in which she has recorded at least one goal

San Diego State returns to action on Friday, April 20, when it travels to UC San Diego. The Harper Cup will be on the line and first sprint is set for 6 p.m.