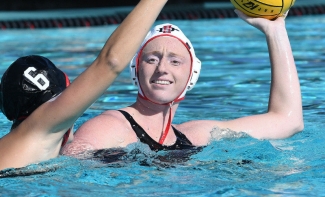 February 4, 2018 (Providence) - T-No. 13 San Diego State fell behind 18th-ranked Hartwick early and could not dig itself out of the hole, falling to the Hawks, 14-6, Sunday morning at the Bruno Classic. The Aztecs fell to 1-2 on the season, while Hartwick watched its record improve to 5-2.

SDSU could not get anything going offensively in the first eight-plus minutes, allowing four Hawks goals in the first quarter and a fifth to open the second. Emily Bennett stopped the Aztecs’ dry spell with a goal at the 7:21 mark, but Hartwick answered with two goals in a span of 2:38. Bennett added another on a power-play situation, but the Zsofia Polak scored her second goal of the day to lift the Hawks to an 8-2 halftime lead.

The offensive struggles continued for SDSU in the third quarter with Bennett logging its only goal of the frame. Hartwick, meanwhile, tacked on three more goals to lead comfortably, 11-3, going into the final frame. Both teams played even in the fourth, scoring three goals apiece, but the Aztecs’ effort was not enough.

In addition to Bennett’s first career hat trick, the freshman was joined in the scoring column by Lizzy Bilz (2 goals) and Maddy Parenteau (1). Lena Kotanchyan led Hartwick with four goals.