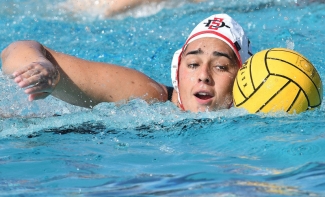 Aztecs fall to 1-1 on the season

February 3, 2018 (Providence) - T-No. 13 San Diego State used a big third-quarter rally to get to within a goal of 15th-ranked Wagner, but could not keep the momentum going in the fourth quarter and ended up on the wrong end of a 10-6 score Saturday night at the Bruno Classic.

The Aztecs (1-1) fell behind, 3-1, after one quarter and 5-2 by the time the second-period horn went off. San Diego State received a pair of great defensive efforts toward the end of the half, thwarting two fast-break opportunities. Paola Vizcarra recorded SDSU’s first goal and Mary Myers followed suit in the second.

San Diego State used a furious rally in the third quarter, scoring two unanswered goals, one each from Hannah Carrillo and Emily Bennett. Wagner stopped the run with a goal from Kimberly Watson, but SDSU pulled to within one with a Vizcarra goal with 1:42 left in the frame.

The Aztec comeback, however, stalled in the fourth quarter as the offense was only able to muster a Carrillo goal with 91 seconds left in the game. Wagner, meanwhile, was able to score four times to provide the final margin.