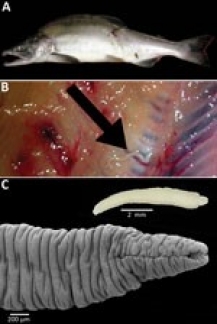 August 26, 2017 (San Diego) – Live worms have been found in packages of salmon sold at multiple Costco stores in San Diego County, 10 News reports.  The report does not name the type of worm, however, CNN reports that Japanese tapeworms are now being found in wild Alaskan salmon and could be in salmon caught anywhere along the Pacific Coast.

Other types of fish can also carry tapeworms or different parasites, so health experts advise to eat only frozen or thoroughly cooked fish in order to destroy worms and larvae.   Tapeworms cause infection and sometimes serious problems if consumed by humans in raw fish such as Sushi, smoked or marinated fish such as in Ceviche, the College of Medical Physicians Canada warns.