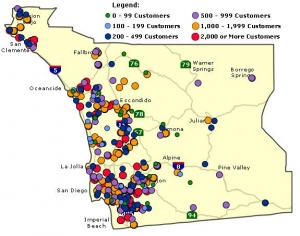 Update 11:10 p.m.  SDG&E advises residents to turn off air conditioners to avoid overwhelming the system when power comes back on.

BOIL WATER ORDERS are issued for several locations; scroll down for details.

September 8, 2011 (San Diego) – A widespread power outage has left 5 million people in the dark across Southern California, Arizona and northern Mexico including all 1.4 million SDG&E customers in San Diego County. The outage occurred because a major power line between Arizona and California was tripped out of service. “Think of the system as linked by springs, when one part goes out the rest are affected," a Twitter message from SDG&E read. The San Onofre Power plant was also impacted and shut down as a precaution.

Tonight, power is beginning to be restored across portions of San Diego County including the South Bay, Rancho San Diego, Jamul and Mt. Helix areas. SDG&E blames the outage on “operator error.” FBI special agent Darrell Foxworth assures that there is no indication of terrorism.