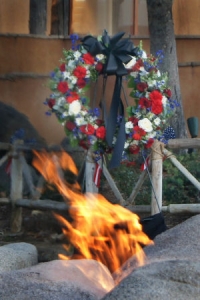 September 14, 2011 (Alpine) – Robert Scheid, vice president of community and public relations at the Viejas Band of Kumeyaay Indians, has submitted these photos of tribal members participating in a ceremony at the Viejas reservation to commemorate the tenth anniversary of the September 11, 2001 terrorist attacks.
On Sunday, September 11, 2011, a wreath was placed at the Eternal Flame located at the Viejas Outlets in remembrance of the tragic events of September 11, 2001, and in honor of the victims of the terrorists attacks, their families and first responders.