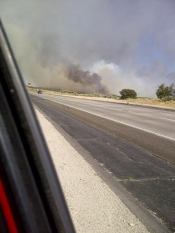 Update 5:20 p.m. - The Old Fire in Campo has grown to 100 acres.  There are conflicting reports on whether Golden Acorn Casino s is being evacuated or whether casino-goers will be sheltered in place.  ECM is awaiting confirmation from Cal-Fire.  Due to access issues a new command post may be established at Royal Road and Old Highway 80.

September 7, 2009 (Fallbrook) A brush fire in Fallbrook burning in heavy brush has been extinguished at less than an acre, Cal Fire spokesman Darrell Pena has informed East County Magazine at 4:50 p.m. today. The fire, initially reported shortly before 4 p.m., put up heavy smoke and was visible throughout the Fallbrook area, said Pena.