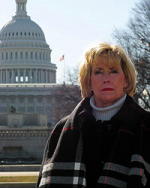 The bills were introduced in response to a U.S. Supreme Court ruling against Lilly Ledbetter (see photo), who worked nearly 20 years at a Goodyear Tire and Rubber Company plant in Alabama. Ledbetter filed a lawsuit claiming discrimination immediately after she found out that she was the lowest paid supervisor at the plant, even though she had more experience than her male colleagues. A jury ruled in favor of Ledbetter.