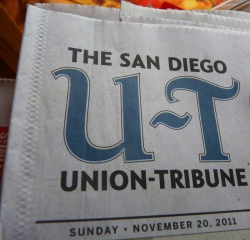 November 20, 2011 (San Diego) –Media reform and citizens’ groups have voiced concern over purchase of the San Diego Union-Tribune, a self-proclaimed “watchdog”, by a team led by real estate developer and political activist Doug Manchester. His major pending development projects are the very sorts of deals an independent media outlet would ordinarily report on and investigate.