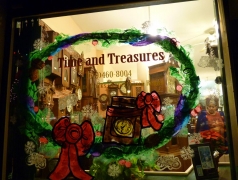 Chirstmas in the Village will be held on Friday and Saturday, December 12 and 13 from 5 to 10 p.m.  A holiday parade will be held each night at 5 p.m., with a pre-parade at 4:30 featuring a Salute to America honoring 50th anniversary Vietnam War veterans. The festival also features strolling minstrels, carolers and street entertainers, live music on multiple sages, and bonfires filling the boulevard.  Plus kids can free visits with Santa at the Goodwill Plaza (8250 La Mesa Blvd.) after the parade up until 10 p.m. and also enjoy carnival rides,, ponies and puppet shoes. 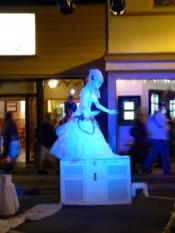 December 10, 2013 (La Mesa)--La Mesa is transformed into a Victorian wonderland on December 13-14 during its old-fashioned Christmas in the Village. The family friendly event features horse-drawn carriages, strolling minstrels, carolers and street entertainers along La Mesa Boulevard. 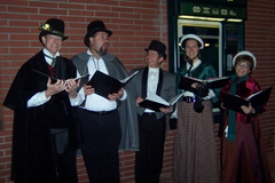 December 11 2012 (La Mesa)—In this centennial year, La Mesa’s annual Christmas in the Village celebration will also feature a holiday parade.  The parade will roll down La Mesa Boulevard at 5 p.m. on Friday and Saturday, December 14 at 15.

During the celebration, the entire downtown village transforms into a winter wonderland complete with horse-drawn carriages and bonfires, strolling minstrels, carolers and street entertainers.  Kids will also enjoy puppet shows, carnival and pony rides, and visits with Santa. 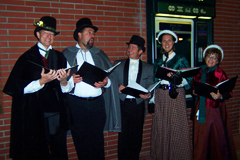