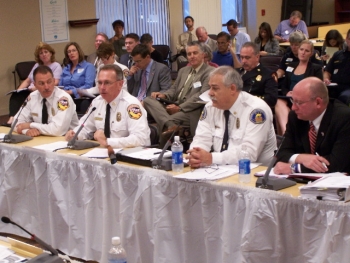 ”It’s October. The winds are kicking up, and we are really challenged…There are blackouts, brownouts, and reduced strike teams.“ – San Diego Fire Chief Tracy Jarmon

“Our members, they’ve all said that constraints of the budgets at state and county levels are wearing our firefighters out.” – Lou Paulson, President, California Professional Firefighers

“The system is stressed…There is zero margin for error…50 engines have dropped off the grid since the Cedar Fire…San Francisco ran out of engines. There are brownouts and blackouts at fire districts around the state…We handled the Station Fire in Los Angeles because it was the only fire…Heaven forbid if we had had three or four fires in Southern California and they were wind-driven.” – Chief Sheldon Gilbert, Co-Chair, Governor’s Blue Ribbon Task Force and Fire Chief, Alameda County

“Our fire prevention budget is shamefully low..Firefighting costs have increased 100% in the last five years…I want to see more put in at the front end.” – Senator Christine Kehoe