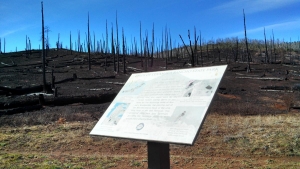 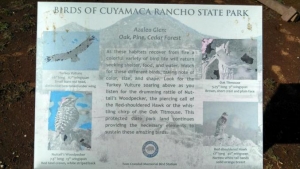 Photos above:   Sign amid charred terrain reads, "As these habitats recover from fire, a colorful variety of bird liife will return."

March 28, 2014 (San Diego’s East County) – One month after a controlled burn at Cuyamaca sparked controversy, as ECM reported , the State Park Service has failed to answer any of our questions.  Two elected officials have issued statements supportive of burn policies despite mature pines and cedars being torched in a park  an estimated 99% of its mature pines to the 2003 Cedar Fire, which charred 95% of the entire park.

Cal Fire has insisted that the burn did not jump out of control, though local cabin owner Craig Maxwell says a state park ranger told him it did.  But if firefighters did not lose control of the burn, this raises an even more troubling question:  Why would State Park officials charged with protecting our public parks order the destruction of some of the last remaining mature pines and cedars, as well as plantings established to replaced what burned in 2003?

Moreover, this region has also been decimated by oak-boring beetles that have killed thousands of trees locally, making protection of what remains even more critical.

June 2, 2012 (San Francisco) -- Efforts by a local group to keep Palomar Mountain State Park open were given a shot in the arm with a $20,000 grant from the California State Parks Foundation (CSPF), the San Francisco based charitable organization dedicated to protecting, enhancing and advocating for California's magnificent state parks. 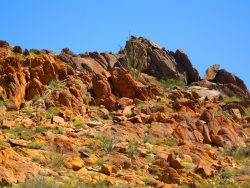 e Governor’s office tell our park officials NOT to comment on Ocotillo,  OR ANY OTHER alternative energy projects adjacent to the Park, is a travesty, a violation of the trust between the citizens and the state.” – Mark Jorgensen, retired Superintendent, Anza Borrego Desert State Park in an e-mail to ECM

March 27, 2012 (Anza-Borrego) – The former Superintendent of the Anza-Borrego Desert State Park (ABDSP) has contacted East County Magazine to allege a cover-up by the State Parks Department and the Governor of serious impacts that the proposed Ocotillo Express wind project would have on our largest state park and its natural resources.  The proposed wind project shares a five-mile border with ABSP and if approved, would erect up to 155 wind turbines each 456 feet tall—some just yards from the park.